An exciting new subject for woodcarvers is shared by one of its foremost artists. James Fliger introduces fish carving by presenting four projects: the rainbow trout, the bluegill sunfish, the black crappie, and channel catfish. A graphic artist by profession, Jim has created beautiful patterns and drawings to help the carver. The book is further illustrated with black-and-white photographs showing the carving techniques in the step-by-step fashion that is so helpful to wood carvers. For the all-important painting steps, color graphics are used with photographs to give the readers an accurate view. Additionally, color photographs from nature and a portfolio of size-winning fish carving is presented.

Share this with your friends
Category: Fish and Marine Life

Used & out of Print Book

Bob Berry set the standard in fish carving in the 1970’s and 1980’s and his skill has continued to evolve. This revised edition of Fish Carving: An Introduction contains a new color section on painting trout, in addition to the full text and illustrations of the six original carving projects: rainbow trout, brown trout, brook trout, bluegill, largemouth bass with turtle, and lionfish with queen angelfish. Step-by-step carving instructions are presented in detailed black-and-white line drawings and photographs. Finished carvings are shown in full color. The new 16-page color section features 64 step-by-step photos with captions.

Bob Berry began his career as a taxidermist, moved on to decoy carving, and eventually specialized in fish carving. He swept the World Championship Fish Carving contest in 1986, taking the top awards in three divisions, as well as Best of Show.

Share this with your friends
Category: Fish and Marine Life, Used and Out of Print Books 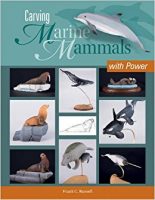 This intermediate power carving series continues with a dive into the sea, giving the carver the instruction for creating marine mammals. Step-by-step instructions, sequential photos, working drawings and patterns, and color schematics lead the woodworker through the completion of the carving process and to a painted finish. The process of carving the manatee figure is displayed in detail from pattern to completed piece. Detailed painting instructions for 16 project plans (21 total carvings) includeSperm, Humpback, Blue, Bowhead, and Pilot Whales, as well as a Beluga,Narwhal, Killer Whale, Manatee, Bottlenose Dolphin, Walrus, ElephantSeal, Northern Sea Lion, Sea Otter, and Polar Bear. This informative volume will bring enjoyment and instruction to the intermediate and the advanced woodcarver. Additional resources include a glossary of anatomical and biological terms, and an overview of carving bits and tips on shaping and texturing.

Share this with your friends
Category: Fish and Marine Life